26 May The Aniak’s Monster Pike

We feel so fortunate to have our fishing lodge be positioned perfectly in the state of Alaska. The Aniak River, and its mother, the mighty Kuskokwim, boast some of the largest salmon returns in the world, in turn, providing the support and nutrients for numerous different resident species including, Grayling, Char, and our famous Leopard Rainbow Trout. This bounty of biomass combined with the lack of pressure has maintained our river, and our lodge, as one of the top destinations for fly anglers from around the world.

While the Salmon, Trout, and Char are generally on the top of the list for our guests, we wanted to take a moment to highlight one of the most underrated and unpublished fisheries in the state. We are talking of course about chasing “Esox Lucious”, or the Northern Pike. 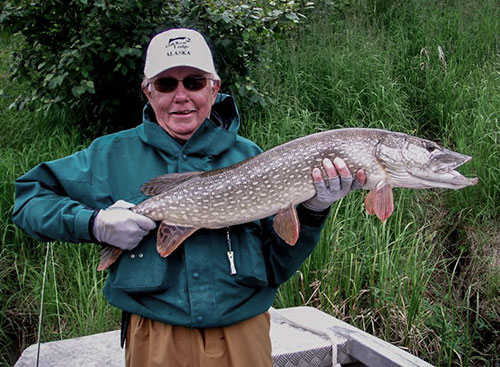 If you have not fished for Pike on the fly before, you are in for some of the most explosive and exciting fishing of your life. Pike are ambush predators at their core, viciously attacking and devouring anything that is unfortunate enough to come within its reach. Mice, ducks, small songbirds, or any other creatures furry or feathery are all fair game to the “The Water Wolf.” While not generally associated with long, hard fought battles, the real draw to fly anglers lies in the sheer ferocity of the strike.

Generally, we employ large streamers and even top water patterns such as Dahlberg divers or deer hair mice. Really, any fly large enough to give them a reason to spend the energy to take it down. Working our boats through the backwater areas, we probe the banks and weed beds looking for a player. Sooner or later that telltale wake of a Pike will appear behind your fly, like a shark stalking a baby seal. Often times it is hard to hold back the excitement and anticipation as you keep the fly moving. Pike are not only always hungry, but they are addicted to the chase. Stop the retrieve of your fly, and often times they will turn away uninterested. Keep that fly moving on the other hand, or even speed up the retrieve, and you will find yourself hooked up to a meters worth of pure fury.

Make sure that you take a little time on your next trip up to the Aniak to chase down these apex predators. You will quickly realize why they are considered one of the meanest fish that prowl our Alaskan water.